Earlier in the month, Dr Maros Krivy was at the University of Amsterdam presenting at the ‘Connecting to the Masses’ conference.  Here are his thoughts on the event:

The conference “Connecting to the Masses, 100 Years from the Russian Revolution: From Agitprop to the Attention Economy,” held on 13-14 November 2017, was hosted by the International 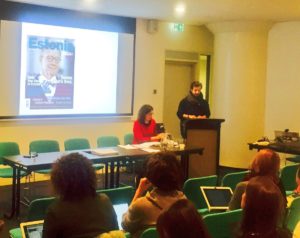 Institute of Social History, Amsterdam. Established in 1935, the Institute is the world’s leading research institution on labour history, holding extensive archives relating to global labour movement. The conference interrogated the transformation of left-wing politics in the 20th century and the early 21st century, combining historical investigations with the analyses of contemporary prospect for progressive democratic politics. At its centre were the relationships between political leaders, artistic movements and popular masses, investigated from the perspective of diverse communication ‘media’ including newspapers, digital platforms, and urban space.

The topic of my presentation was the transformation of Tallinn, Estonia from productivist socialism and digital capitalism; I framed the topic around diverse questions pertaining to urban nature. The presentation introduced the late Soviet rise of an environmental movements and traced its post-socialist mutations. Firstly, I asked about the ways in which the environmental agenda overlapped with the ethnic one, studying how nature protection and nascent nationalism complemented each other during the 1980s. I discussed, secondly, the ways in which distinct aspects to urban nature, such as wastelands and allotment gardens, shaped municipal urban policies and cultural practices in the post-socialist decades of 1990s-2000s. In the final part of my presentation, I introduced a third aspect to urban nature in Tallinn, namely the cybernetic one, critically discussing institutional contexts and social implications of such digital policies as e-citizenship and smart cities.

Other conference presentations covered diverse historical contexts within different European geographies, including histories of Russian Revolution, inter-war and post-war transformation of social democracies across Europe, and current questions of digital media activism in France, Greece and Russia. Conference discussions turned on the political role of technologies and technological infrastructures, extending from quasi-automatized forms of communication on social media platforms to questions of resources, their extraction and circulation.